A Day in the Life

After reading a few other blog posts related to the aviation business, I thought it would be fun (for me at least) to start a small mini series of “a day in the life”.  I would like to think there are people out there who are curious about the life of an airline pilot, both on, and off the job.  So what I have come up with is to write a series of posts on the following:

A day in the Life: Day Off – what does the typical day hold for an expat in Hong Kong?  What is different then home in Canada, and what is the same?  Just a few of the questions to be answered.

A day in the Life: Time to go to Work – the job begins when I get to the airport, but the preparation starts hours earlier.  A daily routine before a long haul flight is very important and can make an all night challenge to stay awake, much easier if a few things are followed.  So before I even start thinking about work, there are some must do’s to prepare.  Then of course once I am in “work mode” I need to prepare for the flight of the day.

A day in the Life: Layover – One of the several perks about this job is that we get to spend 24-48 hours or more in some amazing places that we might not get to see otherwise.  Virtually everywhere I have flown too has some unique experiences, so I will try and highlight some of these things in the various cities I have flown too.  Those cities include, London, Amsterdam, Paris, Frankfurt, Mumbai, Johannesburg, Anchorage, San Francisco, and Los Angeles.  I will also discuss the routine while away from home to make sure I am rested, and prepared for the long flight home to Hong Kong.

I may also include:

A day in the Life: Recovery Day – obviously after a long haul flight crossing many time zones, through all hours of the day or night, it can be a challenge to re-acclimatize to a “Hong Kong Body Clock”.  I will discuss some of my routines to help with this, as well as what I find works best when on a “super compact roster” where I return to Hong Kong with around 24-36 hours, before departing on another long haul flight.

I hope this has some interest to some of my readers, and will be working on these posts over the next few days, so please stay tuned.  In the meantime, I hope everyone has enjoyed the Labour Day weekend in North America.

After another cool and wet stay in Anchorage I wanted to share a few more pictures from my latest trip, as well as some from LAX last weekend!
Enjoy 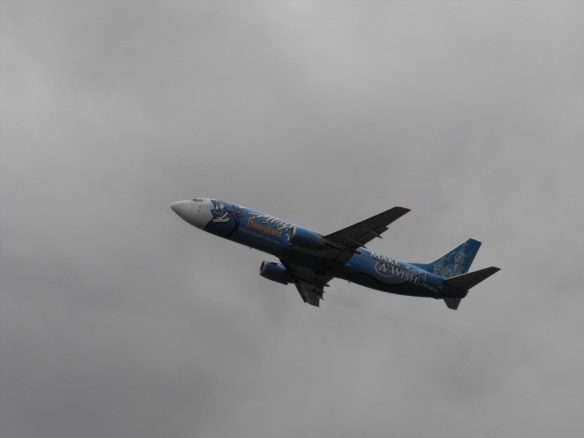 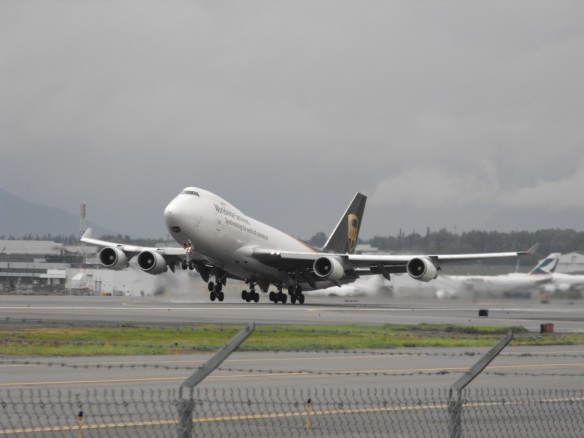 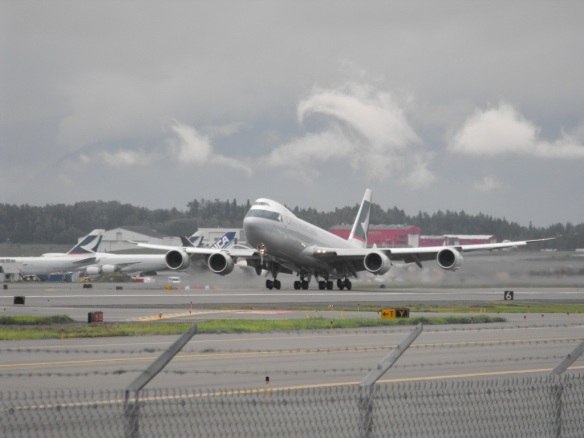 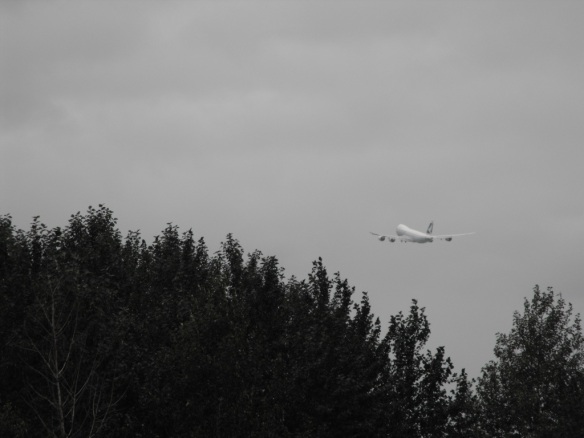 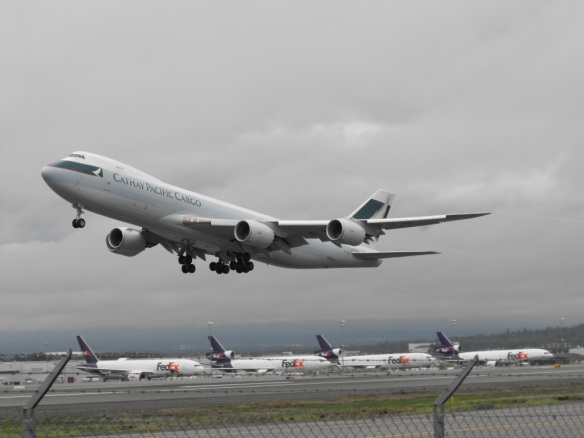 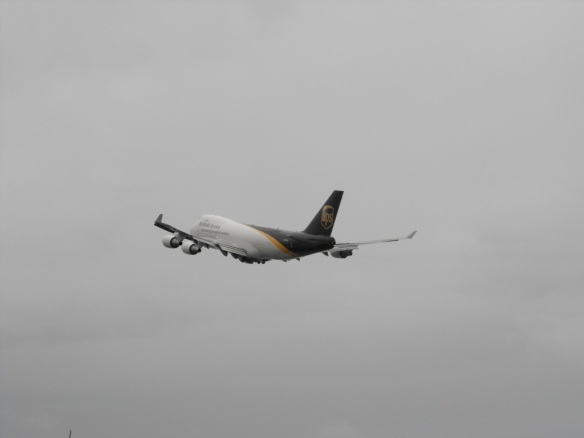 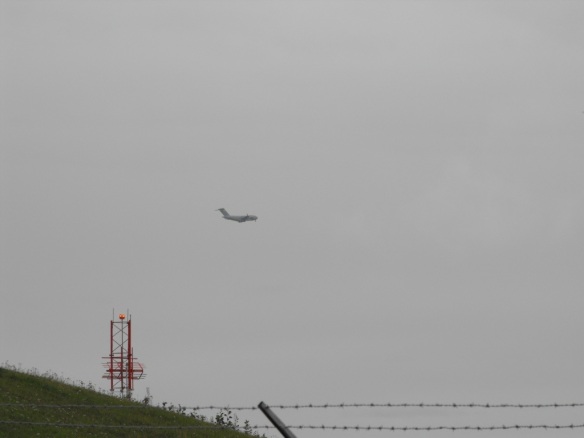 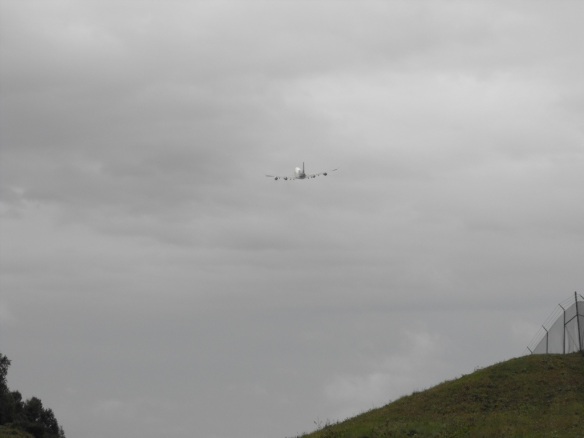 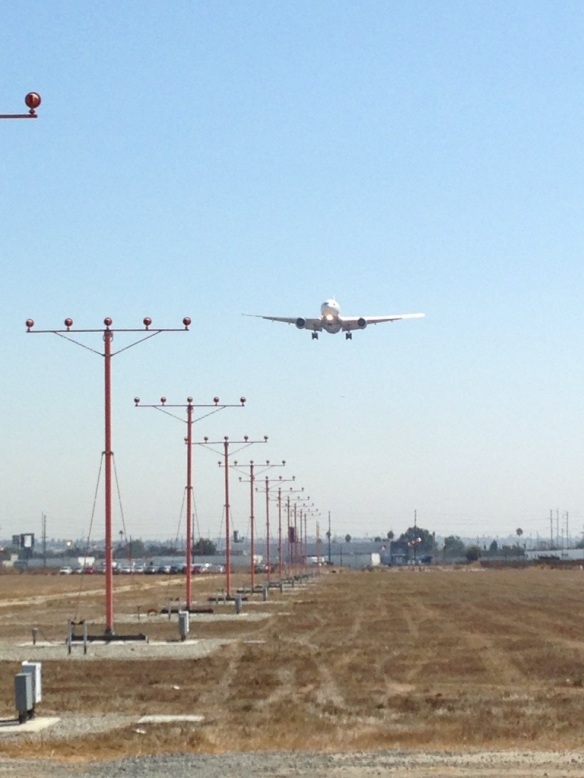 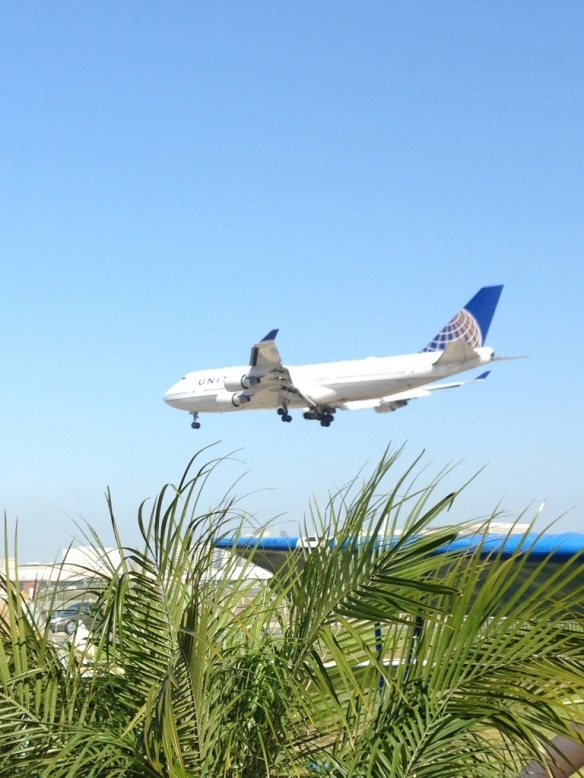 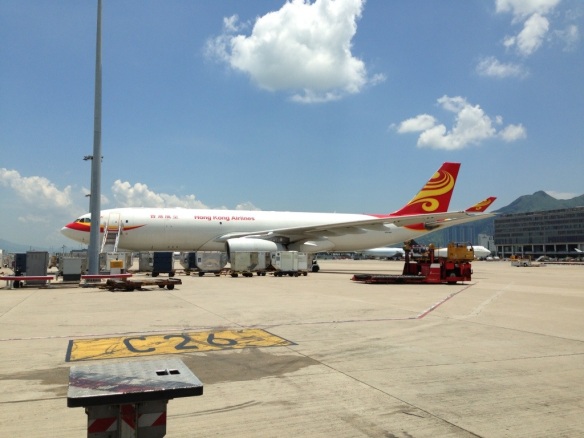 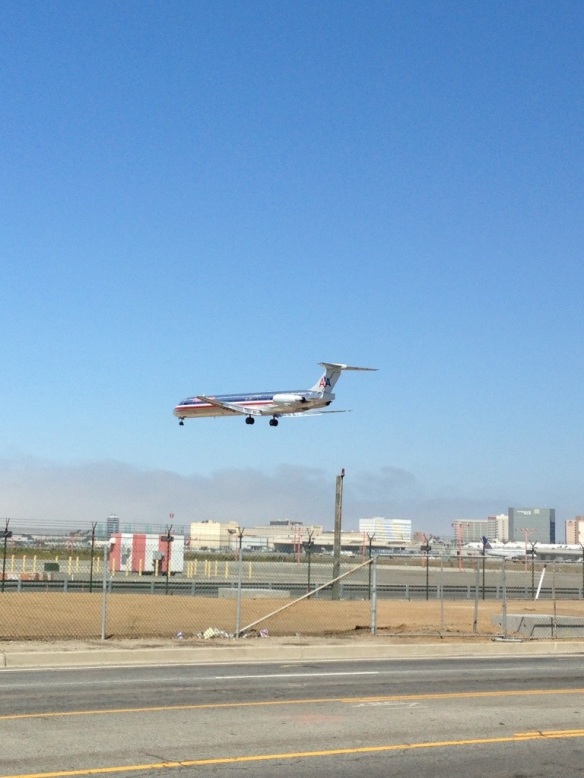 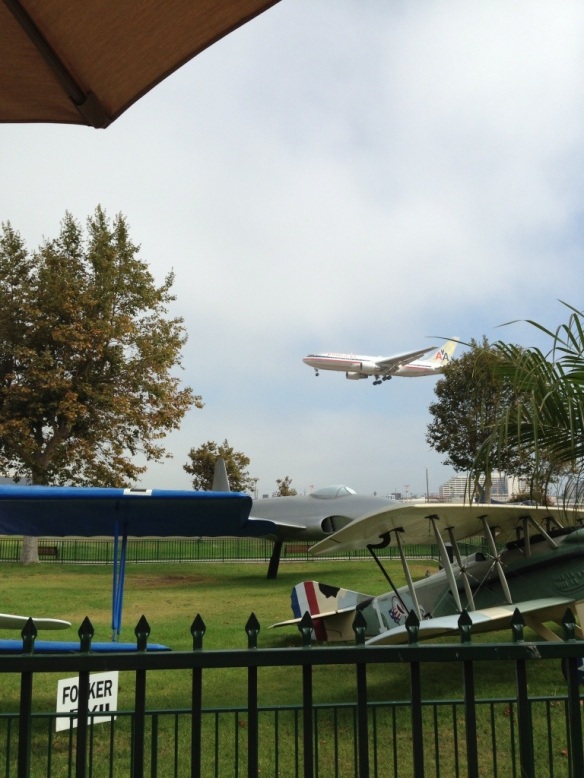 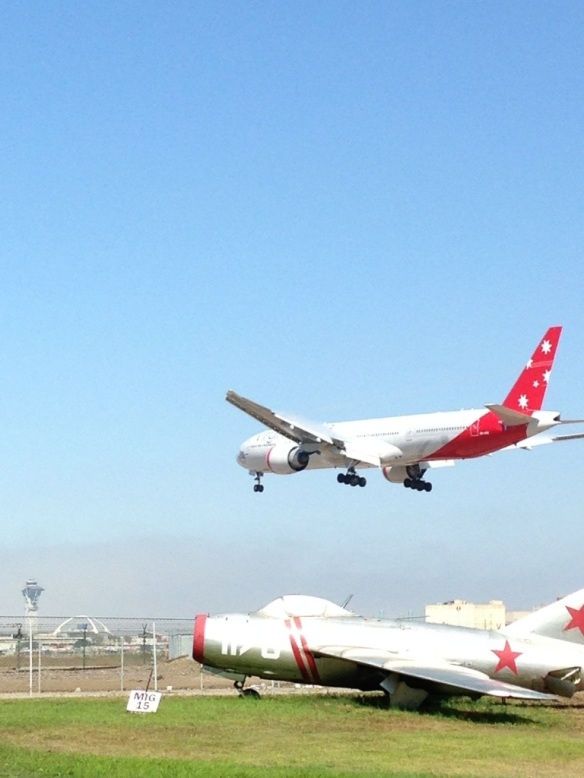 Well through the wonder of social media and a new follower on twitter I have discovered a few links for some great youtube videos showing the day in the life if you will of a Boeing 747-8 cargo flight, as well as a world record breaking cargo flight.

Well I have completed the study questions, spent two days doing distance learning on my Macbook, and yesterday finished the technical ground school for the 747-8F. Today we spent 4 hours in the Integrated Procedures Trainer. It is a mock up of the cockpit with several touch screens making up all the panels and displays. Very expensive software allows us to basically fly the airplane as if it were a full motion simulator or the real aircraft, all while sitting in an office chair. This set up however has no flight controls, so all the training is completed in automatic flight.

I will leave the flying for another post (as we have another day of IPT tomorrow, and my actual first flight in a few weeks. I will keep this post to some of the interesting changes in models from the 747-400 to the 747-8.

The 747-8 falls in the same category as the A380 (the only two passenger jets in this category) based on aircraft dimensions. The 747-8 in fact, is the longest airplane in the world. With it’s increased wingspan and length however, it limits the options for airports we can take the -8 into. Macau for example, a typical alternate for Hong Kong, is only 12 miles away, but it cannot handle the 747-8 on its ramp. We can however use this airport on an emergency basis. Thankfully the 747-8 is nowhere near as restrictive as the A380. As I understand it, we can use Ontario California as an alternate for Los Angeles (only about 50 miles away) whereas the A380 can only use San Francisco, several hundred miles away, costing much more to take the extra fuel to do so.

The first big change in the cockpit of the -8, is the TCAS and Weather Radar. The 400 has one of each, giving valuable information regarding other traffic and thunderstorms. The -8, has two of each. Well, to be accurate, one weather radar can provide two separate displays to each pilot, and two TCAS computers can do the same, giving a much better overall picture of potential threats to the aircraft and crew.

The -8 has triple GPS (only 2 in the 400) allowing us to fly precision, ILS type approaches to airports with GBAS (ground based augmentation system) facilities. These facilities send a correction signal to an airplane, creating and even more precise GPS 3D position, allowing us to land in low cloud/visibility, with both lateral and vertical guidance down to the runway threshold. We can even let the autopilot land of such facilities, a feature that used to be reserved for ILS only.

The flight controls of the 747-8 have undergone some upgrades. Through a Yaw Assist program, the -8 can now add spoiler input to help maintain directional control on the runway following an engine failure above 100 kts. An engine failure during takeoff is typically one of the more critical failures, as a runway is only 200 feet wide, and there can be a large direction change as a result of an engine failure. These combine to require pilots to have a quick reaction time in order to keep such a situation under control. Now, we have some help. Thanks Boeing!

The wing of the -8 was redesigned to be a super critical wing. The wing has become so efficient that the service ceiling of the plane had to be reduced from 43,100 feet, to 42,100 feet. This was because during flight testing, the -8 could not execute a rapid descent fast enough from 43,100 to breathable altitudes. The wing just wants to keep flying. It is designed to fly fast and high, and it almost does that too well. (I found this very interesting) The ailerons have an added feature, they droop when flaps are selected to 10 or more. This of course adds lift during takeoff and landing. (The outboard ailerons retract back up during landing while the inboard ailerons remain extended).

The engines of course are noticeably new design from the 400. The GEnx-B-67 have a trademark “chevron” design to the rear cowl, which lower noise emissions substantially I’m told. The -8 engines also have an auto start feature (available on late model 400’s) that protect the engine from potential start faults. The engine is sophisticated enough that it will manage any start fault, and try up to 3 re start attempts, all the while requiring no input from the crew. In flight, the engine will detect a flameout, and apply both ignitors in an an “auto-relight” attempt as well. When I told my sister about this, she asked why the -8 even needs pilots!

One of the biggest changes in the flight deck is the Electronic Checklist. The ECL is something that has existed in the 777 for years, but it now integrated into the newest 747. It is a very nice feature indeed. It makes normal checklists a breeze, with many completed actions (such as arming the speed brakes prior to landing) already checked off when the Descent Checklist is called. It reduces the workload and allows for fewer “oversights” you could say. It also prompts automatically to the next available checklist. Paper checklists have been around for decades, and for the most part, have been with very few faults. The ECL however adds an extra layer of protection in the realm of human error. Of course when non-normal checklists need to be accomplished, the ECL presents the information in a much clearer format, allowing items to be disregarded automatically (based on a simple yes/no question) again reducing the chance of human error (i.e.. continuing to a non applicable checklist).

I could go on (to the tune of the 40 pages of notes I have made over the last week) about the changes Boeing has put into the 747-8. But in the interest of boring people to death, I will leave Part 1 of my pilot report at this. To be continued of course with some real world, flying experience on the 747-8 in early September. I am hoping to get some pictures up close both inside and out of this great airplane to share with you all. Until then, fly safe. Paris for me on Monday for 3 days… 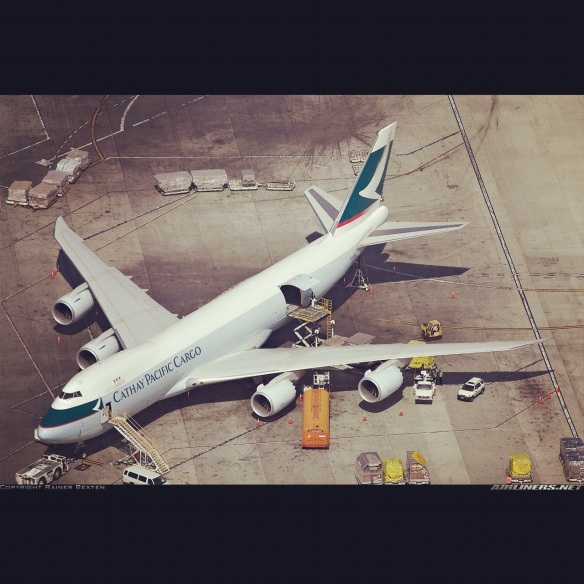